These materials are inspired and partially based on the Software Carpentry lesson on Version Control with Git and the GitHub Campus Advisor materials. 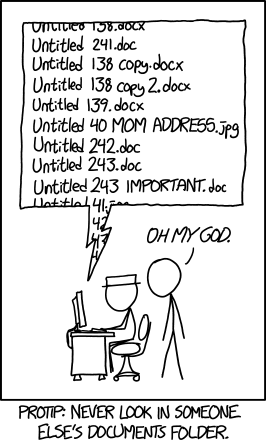 Wouldn’t it be nice to learn how to avoid this situation!?!?

We’ve all been in this situation before; it seems ridiculous to have multiple nearly identical versions of the same document. Some word processors let us deal with this situation a little better, such as with Microsoft Word’s “Track Changes” feature, however, it can be quite impractical if you would like to see changes that are older than your previous round of changes.

Version control is used to track and store changes in your files without losing the history of your past changes.

Version control systems start with a base version of the document and then save just the changes you make at each step of the way. You can think of it as a tape: if you rewind the tape and start at the base document, then you can play back each change and end up with your latest version.

A version control system is a tool that keeps track of these changes for us and helps us version our files (and merge - not covered in this course). It allows you to decide which changes make up the next version, called a commit, and keeps useful metadata about them. The complete history of commits for a particular project and their metadata make up a repository (such as our course material repositories). Repositories can be kept in sync across different computers facilitating also collaboration among different people.

One of the most obvious reasons why to use version control is to avoid the situation illustrated in the comics above, i.e. to keep track of the full history of your changes in a systematic way without the need to have multiple versions of the same file. One really useful feature of version control is the ability to “go back in time”, i.e. if something goes wrong, you can start from some earlier version of the file when everything was still working. You can also compare the differences between versions and see what has changed. In addition aforementioned aspects, version control makes possible for multiple people to work on the same file or project at the same time while still keeping track of their own changes to the files.

There are multiple different Version Control Systems (VCS) (i.e. a software for doing version control) but one of the most popular one is Git

Git is a version control software (developed in 2005 by a rather famous Finn named Linus Torvalds - he also created Linux!) that is used to track and store changes in your files (often source code for programs) without losing the history of past changes. Files in Git are stored in a repository, which you can simply think of as a directory containing files (or other directories) related to a single ‘project’. In practice git takes “snapshots” of your files each time you commit changes. Git follows the idea of distributed version control. Git is widely used by professionals to keep track of what they’ve done and to collaborate with other people. Git is the version control system that is running behind the scenes and used with GitHub (Git + Hub!).

During this lesson, we will learn step-by-step how to record changes to our files using Git.

GitHub in principle is a web based Git repository hosting service. Thus it wouldn’t exist without the version control system Git. Git is also running all the time in the background when using GitHub.

However, GitHub is much more than just a hosting service for Git repositories as it is also a social network where people can collaborate with each other. It is also easy to invite other GitHub users to work with the same project. GitHub is a highly popular place for sharing codes openly to the entire world or alternatively only to the collaborators working on the same project.

All publicly available repositories can also be downloaded to your own local computer where you can start modifying the codes for your own purpose which is called “forking”. However, you should always check and follow the license terms mentioned in the project that basically tells you what you can do (and what not) with the codes that are shared. Usually there might be some limitations for commercial use of the codes for example. Sharing your work publicly to others is also the basic principle of open science.

GitHub repositories are often also used as web pages for different projects. In GitHub such web pages typically include technical documentation, instructions and examples how to use the codes or software shared on that page. It is extremely important that you document well your codes and programs that you have done! GitHub provides a nice platform for doing and sharing such documentation.

Each repository (and possibly its subfolders) includes a file called README.md that by default is the front-page of the given repository in GitHub. Those files are written using a specific simple language called Markdown that can be used to create nice looking web pages with different formattings, figures, tables and so on. Markdown is really easy to use once you have learned the basic syntax of how different textual elements are written.

There are multiple useful tools integrated into GitHub such as possibility to edit the documents or codes directly from the web site. What is even better is that Git is always running in background also in the web environment, thus all your changes made in the web browser will be saved as commits. It is also possible to browse the whole history of a file directly from the GitHub’s online interface and track the changes that you have done.

Usually Git (the software) is run from the command prompt but GitHub provides a way to do Git commands without the need to run any commands in the terminal. There are, however, also other graphical user interfaces for Git that comes with some Integrated Development Environments (IDE).

In GitHub it is also possible to give feedback to the developer by creating a specific “Issue” that can be used to report for example a bug that was found in the code or software. Issues can also be used to track ideas, enhancements, tasks for projects on GitHub. You can use Issues also to organize tasks you’d like to accomplish, such as adding new features or auditing old ones.

Few basic terms that are used often when using git and GitHub (not exhaustive).